Fort Lucan Adventureland has been Dublin’s biggest Adventure playground since 1993! Generations of children have come to Fort Lucan to seek adventure and excitement. Set within a huge wooden Viking Fort, the centre provides hours of outdoor fun for children aged between 2 and 12 years.

Kids can climb into our huge towers and then flee their pursuers via the 40 foot slides, along sky-high walkways, fly through the air on the ariel runways or dodge their way through the maze. Once firmly back on ground level, they can challenge their friends to a race through the army style assault course.

Children of all ages can then show off their driving skills on one of our two Go Kart tracks. One is for children aged under five, while the other is for older motorists!

Ye Old Crazy Golf is a professionally designed Crazy Golf course which is equally challenging for the parents as it is for the children. Who will win...? Mum, Dad or the kids?

Then on to the famous Waterfall! Known as the Waterfall to demonstrate its steep drop while water flows around you! The bravest kids sit on their own boat, swoop down the slide and then across a pool of water below.

The Raging River is a pair of towering waterslides! Small inflatable rafts are the vehicle this time and two children can go down together (or with an adult!!!) . The first slide is a hydro coaster, once the ride starts hold on tight as your raft drops to the first bump. Then drops down again and try to catch some air as you level out for the next drop! The second slide is a blue covered slide. Again the slide starts with a whoosh of air and you are off, into the blue semi darkness. The ride snakes around as your raft sweeps up the inside of the tube before finally you are back outside at the bottom, a bit splashed bit exhilarated!!

The Helter Skelter opened in 2018, and is a slide built in a spiral around a high tower. Children climb up the middle of the tower, and slide down the outside, woosh! At 15 meters it's even taller than the waterslides. 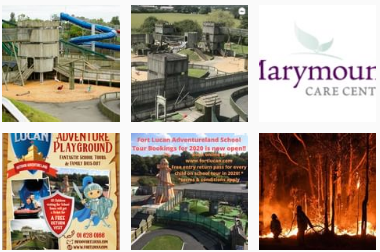 Desktop Version
We use cookies to ensure that we give you the best experience on our website.
I accept